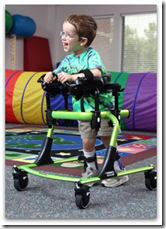 Our PT came by and we measured Bella for one of these – a Riftin Gait Trainer.  Thrilled would be the word to describe how I feel about this!  Ignoring what Ortho and Physical Medicine and Rehab have told us, she does her own thing.  She wants to be mobile.  She wants to be out of her room.  She wants to go.  It’s going to be a long road, but this girl will move on her own power in an erect position.

I am still searching for the right ortho for her. I have to find someone who will see Bella – not all the machinery that comes with the package. I got a new name this week. He is outside of TCH, and I’m totally fine with that.

This weekend one of my other daughters broke her wrist.  We took her to an orthopedist that goes to church with my sister.  He’s really great.  While I had him face to face, I asked about Bella.  He and his OPA were pretty amazed by her need – not as simple as I was hoping.  But he gave me the name of (in his opinion) an excellent pediatric ortho.  He said with something this extensive we need a really good pedi ortho. So we’ll make the appointment and we’ll hope.

In the PTA’s opinion we have to build up these legs and get her up before she gets bigger and so out of portion that it become very, very difficult for those little legs to support the increased mass.  So we work hard.  Three times a week hard.

I’ve been wondering what my motivation is here.  Is it just to prove the doctors wrong (again)?  I don’t think so.  After examining myself, I think it’s because she wants mobility so badly – and I want her to have anything she wants.  There are so many things I can’t fix, but I can fight for this one. 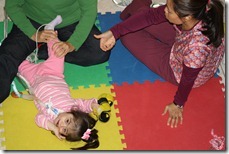 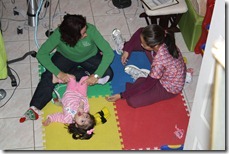 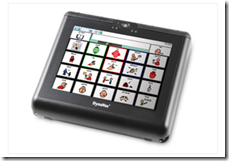 This, on the other hand, does not have me thrilled.  This is a Dynavox.  Assistive technology to help Bella communicate.  What?  No, Bella signs.  Bella sometimes even says a word or two.  She’s amazing with her signing, in my opinion.  I thought that was the direction we were going.  Speech brought this up.  We did an eval and this came up.  She was hesitant to talk to me about it.  She thinks it will help Bella.  I’m having a hard time swallowing this one.  I don’t want her communicating through a box.  I am excited it’s out there for those who need it, but I thought we were headed a different direction.  Oh Bella.  What do you need?  Where should we go on this one?

You should use your iPad as a communication device. There is an app called Proloquo 2 Go that costs around $180 thru Itunes. I'm saving up to get it for my daughter who also has Down Syndrome, but is 17. It has pictures, symbols and words. It is great! Look into it!

The use of assistive technology does not hinder development of communication skills beyond the use of the device! In giving your child a way to communicate with the whole world (since not everyone knows sign),, you're opening the door to so much more! I work in AT and I have seen children make some pretty incredible progress with their devices (some even outgrow the need for them).