Swinging…the most fun on the planet!! 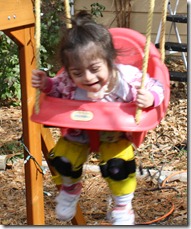 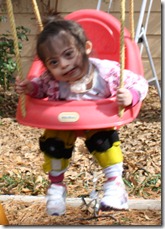 A side trip to the ER.  She was satting 87-90 on 3.5 liters of oxygen, heart rate was in the 150s and respirations were 60s to 80s.  When we couldn’t get all that to calm down, we decided to spend the day at the ER.  Negative for RSV and flu.  X-ray was unchanged for her.  So we asked to go home.  The consensus was that she’s been off the vent too much and she just crashed.  Pulmonology called the next day.  “Saw you were here.”  “Yep.”  “Well, after she gets better, start weaning her again,” was their compassionate response.  Yeah, about that.  I’ve decided.  No more following their instructions (if her stats are good, keep her off).  I’m listening to my mother’s instinct that says this girl is a fighter.  She’ll push herself till she crashes.  Slowly, slowly, slowly.  We will limit the time off and just move slowly forward.

Later in the week….after much sleeping and oxygen…..

Mechanical Soft!  We decided to take it up a notch with Bella.  She tried scrambled eggs, finely chopped.  She didn’t chew, but she did move the food around in her mouth very well.       Clap for me – I’m awesome! 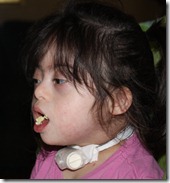 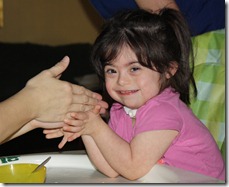 Playing around in therapy! 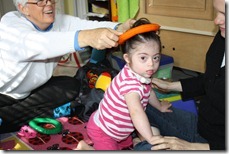 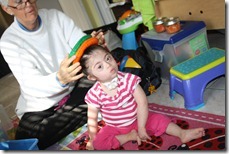 Outside on the trampoline – she LOVES it! 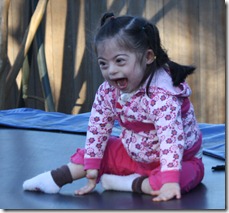