We tried a new ortho in Cincinnati, OH today.  My Maps app said it would take me 1.5 hours from my front door to the hospital.  I figure that’s not so bad considering it used to take me that long in Houston if it we hit any kind of traffic on 45.  So we went.  And he’s not Dr. Mansour, but he at least understood her patella and what it is doing.

(Remember this is our 7th Ortho. Good ones are hard to find!)

He didn’t feel she had as much limb lengthen discrepancy as the other docs did.

He was glad that Dr Mansour started with her bones and not her soft tissue.

He feels like her leg is about as straight as it’s going to get.

The surgery to get her patella in the right spot is complicated and involved muscles, ligaments, and tendons.  It’s a pretty big deal.  And he’s pessimistic about it, he said.

Cincinnati Children’s is a teaching hospital (my favorite thing to deal with – can you feel the sarcasm?).  So mostly the doc talked with the resident about studies.  I have heard of these studies.  This is my 7th ortho.  Think about it, he says and let me know what you want to do. And he leaves.

The nurse is still doing computer work – so many of them do this now.  The doctor waltzes in, touches you briefly, says a few things, and leaves.  Meanwhile, the nurse has been diligently typing the whole time. I have learned this is the person with the real answers – the ones in English!  So, I start asking her questions.  Lots of questions.  The kind thing sits down and we visit for probably fifteen minutes.

You know this guy.  You work with him.  What does he mean by pessimistic.  No ortho has ever said that to me before. I explain all of the docs she has seen and our experiences.  And then I get the rest of the story. He doesn’t like the odds of the success rate of this particular surgery.  50/50, at best 60/40. He doesn’t like to put a kid through all of that, then a cast for 6 weeks, then therapy, for a 50/50 chance that things might improve.

Bella, like most kids with Trisomy 21, has extremely flexible joints with excessive range of motion. So if they go in and reconstruct this knee by messing with the quads, lengthening this, shortening that, and everything else they are going to do in there, it might not work. Or it might work for a time and then loosen all up and not work anymore. (Dr Mansour had mentioned this)  In this particular doc’s experience, repeat surgeries aren’t often successful.  (Dr Mansour was more willing to do repeats, but warned that scar tissue starts to become a problem)

Bella is lucky, though, in that she is teeny.   If Bella had a typical DS metabolism, she would weigh more.  The extra weight is particularly difficult on the knees.   She told me of a patient they have with bad knees who weighs 260 pounds at 19 years of age.  There is not surgical answer for her knees. She just needs to lose 150 pounds. And that isn’t likely, so she’ll ride around in a wheelchair for the rest of her life.

She said you really need to think about whether or not you want to do this surgery.

OK – if we do nothing.  If we take out the 8 plate in her knee, but nothing else, what is the outcome?  She’ll continue as she is.  Her patella will continue to ride around on the outside of her knee.  it will continue to collapse.  She’ll continue to need her walker/wheelchair for longer distances.  She will most likely develop arthritis.  As she continues to compensate by walking with her funny gait, she will develop functional scoliosis.

and it’s successful – her knee is stable.  She can walk.  She can learn to jump.  Yea!

and if it’s not – or if it doesn’t last – we have messed with the insides of her knee and she will probably develop arthritis. And other than that, she’ll be the same that she is now. As she ages, she’ll need a walker and a wheelchair.

So. after talking with the nurse, I told her, it seems to me that if we go forward, she at least has a 50% chance of having some improvement, even if it’s just for a time. She agreed.

She is going to ask the doctor if we can take out the 8 plate and do the reconstruction in the same operation.  She didn’t know – since the 8 plate is on the left side of the knee, and a lot of the work for the knee will be above and to the right.  He might feel that was too much for one time.  She’ll call me tomorrow.

Sweet girl.  I was so proud of her.  This was her second weight bearing x-ray and she whimpered but she didn’t cry!  She is doing so much better with doctors and hospitals.  I really think because it’s been a year since any major trauma!

My sweet girl and I 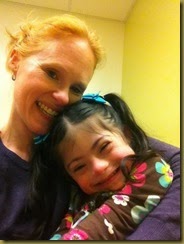 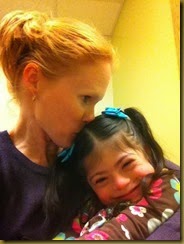 And yes, I was distracted thinking about all of this on the way home and ended up down in Lexington, and then over to Frankfort, and then finally home!  Oh well!  Not the most direct route, but that is some beautiful country!  Especially right now as Spring is starting!