Good things are happening around here

Bella is doing really well.  She is back on her antibiotics which is helping her secretions, which means she feels better.  We went to see the orthopedic doctor this week – not such a good experience.  New facility, people still learning what they are doing, but very obvious to me that they are not used to kiddos like Bella.  OK, I’m alright with that.  But I’m not alright with doctors that aren’t OK with kids like Bella.  Anyway, we’ll be finding a new ortho, PT suggested we just go to a PMandR doctor.  We may try that.  Long and short of it, her left leg is shorter than the right one.  We ordered lifts for her shoes.  And he has no idea why she won’t bear weight on that right leg.  The fact that her knee is swollen chronically, that her patella is floating around her leg, and that her lower leg is torqued in a funny angle, not a concern to him.  She’s not developmentally ready to stand anyway, he says.  Hmm…and how did he determine that one?  By glancing at her on the vent in her wheelchair.  Ahhh…  well, this Mama believes in her baby and only wants doctors on her team that also believe in Bella.  We’ll figure this out Bell.

Meanwhile, she is adorable as ever.  Trying to learn to chew, using her stander, and having crazy hair after leaving it in braids over night. 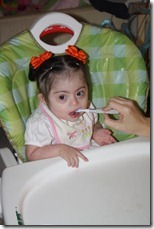 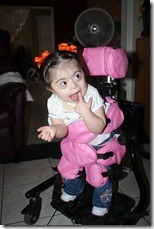 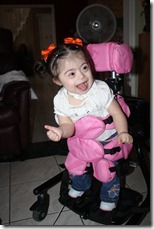 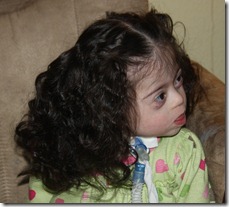 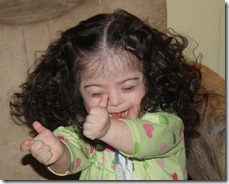 Her OT brought over this mat she found at Lowe’s.  It’s great.  She can sit up all by herself (!!!!) and we aren’t as worried about when she does tip over.  She is loving being on the floor and playing! 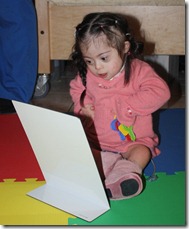 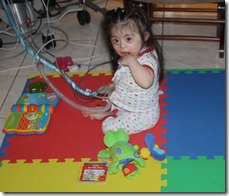 Nice doctor. Aaahmm. I'm a little miffed anyway this morning because I got a really ignorant comment on my blog. It makes me think we aren't getting anywhere with people realizing they are children, not lumps. They have feelings, they want to play. THEY ARE CHILDREN!!!
Lookin good little munchkin. And you know I love that hair!

She has the best hair! I agree that it's important to have Dr's who believe in your child and work with you! I hope you find a better fit for Bella.

That is awesome!! Go with your gut when it comes to docs!