Most women become mothers by accident, some by choice, a few by social pressures and a couple by habit.

Somehow I visualize God hovering over earth selecting his instruments for propagation with great care and deliberation. As He observes, He instructs His angels to make notes in a giant ledger.

Finally He passes a name to an angel and smiles, "Give her a handicapped child."

The angel is curious. "Why this one God? She's so happy."

"Exactly," smiles God, "Could I give a handicapped child to a mother who does not know laughter? That would be cruel."

"But has she patience?" asks the angel.

"I don't want her to have too much patience or she will drown in a sea of self-pity and despair. Once the shock and resentment wears off, she'll handle it."

"I watched her today. She has that feeling of self and independence that is so rare and so necessary in a mother. You see, the child I'm going to give her has her own world. She has to make her live in her world and that's not going to be easy."

"But, Lord, I don't think she even believes in you." God smiles, "No matter, I can fix that. This one is perfect - she has just enough selfishness." The angel gasps - "selfishness? is that a virtue?"

God nods. "If she can't separate herself from the child occasionally, she'll never survive. Yes, here is a woman whom I will bless with a child less than perfect. She doesn't realize it yet, but she is to be envied. She will never take for granted a 'spoken word'". She will never consider a "step" ordinary. When her child says 'Momma' for the first time, she will be present at a miracle, and will know it!"

"I will permit her to see clearly the things I see...ignorance, cruelty, prejudice....and allow her to rise above them. She will never be alone. I will be at her side every minute of every day of her life, because she is doing My work as surely as if she is here by My side".

"And what about her Patron saint?" asks the angel, his pen poised in mid-air.

God smiles, "A mirror will suffice." 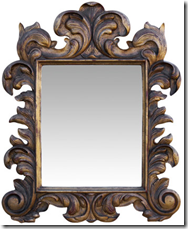 I read this as a teenager. It made such an impact on me that I remember where I was sitting in my parent's living room, and I have a terrible memory - so that's saying something.

At the time, I didn't understand the last line. It's means that the mother is a saint. She is wonderful, yada, yada, yada. How I interpreted it is "give the woman a mirror, so she'll see herself and her expression and remember to smile or maybe some days, force herself to smile."

Then I was given it in the long ICU stay by one of the Attendings. He is a really sweet man. He is of German heritage and looks a lot like my Dad. I instantly trusted him. He was implying the first interpretation - You are awesome, Mom. Keep it up!

I don't know about other mothers, but I still really think my original view is more in lines with reality. Like today, with no nurse, five therapy appointments, no access to the outside world what I need is the mirror over Bella's bed to remind me to smile. This is the face my baby sees day in and day out. There should be smiles and love in my eyes for this beautiful girl. She deserves it!

I left a comment here yesterday! Huh. Love yo so. How are things going? We watched the first Harry Potter movie and decided that Ginny Weasley looks like Jessi, with slightly redder hair :)

You are the best mother ever to Bella. We all do what we can, each day,and on some days, we do better than others.But everyday, these precious children remind us why we were chosen or perhaps why they chose us, to be their mothers.

Love and payers from California.