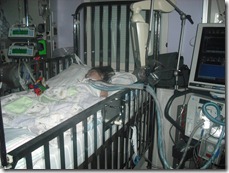 Well, I really think this all starts back when we went to pulmonology and he wanted us to start increasing her time off the vent.   She suddenly started needing oxygen.   The pulm fellow said that this probably lowered the small amount of reserve that she had.  Then along came this bug.   So she kept fighting and fighting.  Meanwhile she was getting a little dehydrated which we didn’t know since she is on continuous feeds (they said this is what kept her from getting too bad hydration wise) and there were no outward signs.  We kept going back and forth to the doctors.  They run a million tests and did some x-rays.  Her lungs look worse than her last admission, but she still looked OK, so we stayed out of the hospital.  Meanwhile her blood pressure is getting lower and lower and her heart med is helping this process.  The heart med is also restricting blood flow to her kidneys since her BP is so  low.  We keep giving her diuretics not knowing she’s getting dry.  The desats continue and the oxygen needs keeping going higher and higher.  Still on Wednesday the doc said we could take her home if we wanted, but after talking and talking I decided we should stay.  They did a direct admit and then the craziness began.  She was admitted to the PCU, but we had come directly from clinic so she had no access.  They start poking and prodding.  She is screaming, well her pretty quiet intubated cry.  They took her blood pressure and it was 50/28 – and that is her totally mad.  They look at her labs and realize how dry she is (that is when they tell me thank goodness she has been on the continuous feeds) and they send us down to the PICU.  Then the horror begins.  I can’t go in because she is now considered unstable.  They work for 2 hours to get a central line.  She doesn’t have access so they can’t give her pain meds.  They have some nasal spray they told me but it isn’t as effective.   I spent that time in agony.  I waffled between guilt that I am the one that decided to admit her so this is all my fault and gratitude that she is here.  I’ve watched from the hallway in the CVICU while they tried to start an Art line once – for one hour they poked her.  That is what was playing over and over again in my head.  Finally, after 2 1/2 hours, they let me back to see her.  They had gotten an art line and then started the central line.  As soon as they got the first line they paralyzed and sedated her, but she had to go through most of it without any relief.  My sweet girl.  She was starting to move a little and trying to find me when I got back there.  Her numbers were crazy.  She needed a transfusion which we got.  They redid all the labs from the previous day.  Wednesday was a hard day for my little love. 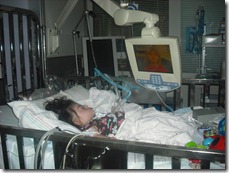 Thursday she decided that she didn’t like the hospital vent.  She was breathing asynchronously.  She also has a leak around her trach which allows her to make little sounds.  She loves this, but the ICU vents are very sensitive and don’t like air leaks of any kind.  The RT wanted to increase the size of her trach and cuff it.  I just kept thinking how mad that would make her once she woke up and was better.  Fortunately, our pulm fellow knows her very well and overrode that idea.  They ended up putting her back on her home vent and increasing her PEEP.  She was much happier on her own vent.  We did an ECHO to check on her heart.  Thursday afternoon we finally got the answer we had been looking for.  They were sure there had to be an underlying sickness going on here.  There is no rapid response test for para influenza, so it took some time, but at least we finally knew what was going on in the background – para influenza virus, variant 3.  That evening she was stable enough to head back to PCU. 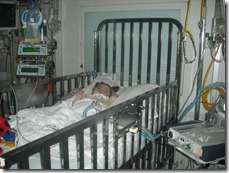 Friday morning her antibiotics were all discontinued since nothing had grown in any of her cultures except her normal flora and we had the positive viral test.  She continued on 5 liters with multiple desats.  IPV and more xrays were ordered.

Today she is on between 5 and 6 1/2 liters.  She hovers in the upper 80s and lower 90s forever  then she’ll shot up to the upper 90s and hang out a while, then down again.  Her pulm fellow really wants that number above 93 for her pulmonary hypertension, otherwise we are just going to aggravate that and then have more problems to deal with.  She gets mucus caught in her airway and the alveoli around it all collapse and she desats.  Then she coughs and her sats go up again and the mucus settles somewhere else and we start the cycle again.  They have restarted her heart med and are reintroducing her diuretics.

Anyway, everyone thinks she is going to be OK now.  It’s just going to take some time.  The thing she always needs, more time.

It’s an interesting battle for these little ones.  The mitral valve doesn’t like it when she gets sick and this crazy spiral starts.  It’s amazing to me the body’s response to sickness – how the heart causes certain problems and how in order to support the heart all of the things we do to support the lungs gets taken away, which improves her heart, but hurts her lungs.  So then they have to be reintroduced before the respiratory status gets too critical.  It’s amazing how interconnected everything actually is.

I'm just glad that she's getting better. I'm the same way though. Jax is not nearly as sick, but his labs are all out of wack and his bowels completely shut down with this strep and pneumonia. And when he is in PICU with a respiratory virus, he usually needs blood, and its a vicious cycle chasing labs and diuretics. The body is an amazing thing!

poor baby, we are praying hard, so happy to hear she is on the mend.

Bless her heart, praying for all of you Shelley.

Isn't it amazing what our little ones go through? UGH! Praying for all of you.

One thing that has REALLY helped Christopher is a CPT vest - like kids with Cystic Fibrosis use. You might ask the Pulmo to see about doing a trial run with one, especially combined with some nebs to get all that gunk out of her chest. I was worried when we first got ours about Christopher's heart & the shaking, but it has REALLY helped.