If you will, we do have a prayer request today.  We know that faith can move mountains and help little tiny girls.  On Sunday they were talking about releasing in a day or 2.  Today they were talking about releasing in a week or 2.  Arabella lost weight last night.  It might be due to the excess stimulation of having all of us hanging around her and loving on her or maybe she didn’t get enough to eat.  The doctor wanted to give her 24 hours to see what she would do on “demand feedings”  - I’m awake, feed me.  So I left hearing we’ll probably have to go back to tube feeding a feeding or two tomorrow.  Ugh!  Please pray for our girl.  Please pray that she will be strong enough to eat, to eat the amount the doctors say she must, and that she’ll gain weight.

Last night I leaned over to Jason and told him that I have put Arabella’s name down on the temple rolls often.  Little did I know how much she really needed it.  I am grateful that Heavenly Father has watched over her.  He knows and loves all of His children.

In other news, We ordered Arabella’s formula.  It’s not the cheap and easy stuff you can just pick up at HEB or WalMart.  It has to be ordered through the pharmacy.  They didn’t have it, but ordered it for us.  It should be here late tomorrow afternoon.  Yeah!  We also had to come up with a car seat.  Five stores later, we had a simple car seat.  No one sells just car seats anymore – they sell “traveling systems.”  Only thing is that I don’t want a stroller.  I just want a car seat.  I want to get a twin stroller since Joy isn’t walking yet.  Of the five stores, there was ONE that carried twin strollers.  One was a side by side umbrella-like stroller.  Not enough support and I don’t want a side-by-side.  Joy tends to love on people a little roughly, so it’s for Arabella’s protection.  :)  Babies R Us had one duo glider (one in front, one in back), but it was baby blue.  They even had the matching infant car seat.  But it was seriously light blue – baby BOY blue.  I just couldn’t do it.  I tried to talk myself into it.  I thought of myself in the airport by myself with all my junk and the baby and the car seat (you know Asia’s life – my hats off to you babe.  I have a new respect for you.  I am so used to having an extra pair of hands around.)  But I just couldn’t bring myself to have to endure “oh, is it a boy?” for the next year.  I found out that one doesn’t just walk into a store and make a purchase.  One chooses what one wants online and then purchases it.  That’s lovely when you have 9 months!  Oh well, the kid has a car seat and we’ll get a stroller in Houston when I have time and the inclination to shop again.  :)

So the long and short of it, Heavenly Father is aware of Arabella’s needs.  He has already watched over her and sustained her.  We are asking for your prayers to help her over this last little hurdle.  Thank you. 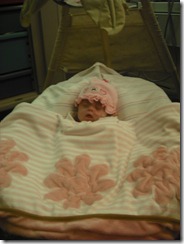 When we walked into the NICU, they had her in the swing.  So cute!  She was pretty sleepy today. 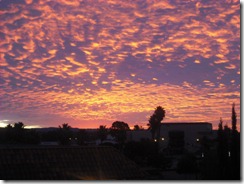 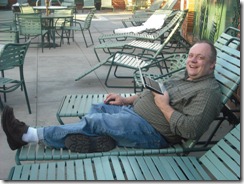 We had to do laundry today.  The facilities are pool-side, so here is Jason waiting for the wash to get done!  Poor thing.  :)