This is the plan…

The surgeon that did her second fundo happens to be on call today.  I am grateful for the seemingly innocent coincidences during this stay.  President Monson says coincidences are God’s way of being anonymous.  I am grateful.  The surgeon remembers Bella.  Makes sense.  It was a terrible mess when she went in there – a partially dead stomach, abscess, fluid everywhere.  I guess that’s hard to forget.

She says that there is not enough tissue left to re-do her fundo.  Which means we are left with option number 2.  Bella will get a JG tube.  The good thing about that is it’s pretty minor to put in (compared to major surgery). It’s done here in Interventional Radiology – just like her PICC lines were.   Bad things – continuous feeds.  Where Bella goes, so goes the feeding pump.  If it comes out, we have to return to the hospital, you can’t re-insert these at home.  They tend to get blocked more than g-tubes.  And the small intestines weren’t designed to be the start of the digestive tract, so a consult with the dietician has been ordered.  Her super high calorie, super fortified formula may need to be changed.  We’ll  see.  And now that I know she is refluxing so badly from just 15 cc’s (that’s 1/2 an ounce), I am going to be so much more paranoid with keeping her up in the 30 degree angle and super stingy with how much flush the nurses and I can use for her meds.  I am saving my pennies for a Nap Nanny right now.

The pulmonologists want a swallow study.  Cardiology wants an EKG and echo.  I’m hoping now that we aren’t having major surgery, just a procedure, that we can be home before school starts on Monday.

Bella is feeling better and I was bored so we were playing: 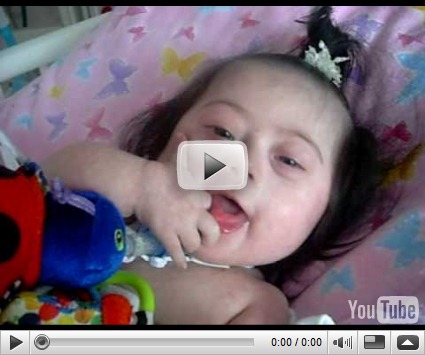 For my record keeping –  The picture that Dr Brandt drew on the crib sheet.  The left is what happened the first time – the fundus is wrapped around the esophagus.  The middle (minus the bold line) shows what was left after they re-sectioned her fundus.  On the right is what she had to do – basically just pulled it over and hoped for the best.  The left picture also shows what the GJ does – goes in the stomach and the tube goes down into the small intestines. 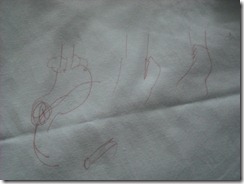 The circles are the sphincter there.  This also explains why she must be feed continuously.  The body naturally protects itself from overeating and just sends out small bits to the small intestines.  By bypassing the stomach, we have to just give little bits or she’ll get sick.  The liquid balance, the osmosis balance, has to be kept in mind as well.  If too much is dumped in there, the body will send lots of water and she’ll get diarrhea.  Other options later on when she’s bigger:  The second image with the bold line this time.  She could go in and staple down to basically create a new fundus then wrap that around.  A more radical option that is sometimes attempted (bottom image) is to bring a section of the small intestine to the surface and feed directly there.

She also apologized again for all that Bell has been through.  In all of the fundos she has done, she has never seen this.  Same thing Dr Stein said and Dr. N, her first surgeon.

Question yet to be answered (or asked) – reminder to self:  The Zantac will help with the acid in the stomach, but will she feel hungry all the time?  Sounds miserable!

I LOVE her smiles!

lol, I should have read this post before commenting on the previous one. Good luck with the GJ placement.

She does look good.Such a re-bounder that fighter of yours.JG is the way to go.I have know several kids that went that way and put to rest much of the paranoia of aspirating.Not forever,just a way of getting there.I really think you'll be on track for Monday.I also love the idea of coincidences being God's way of being anonymous ... comforting,reassuring and validates that feeling that comes upon us when situations occur that it just can't be left to just how it all played out.I think sweet Bella definitely needs a pink Nap Nanny!

Bella is so adorable! We are keeping you all in our prayers for good results. One thing, have the docs considered doing something similar to a lap band proceedure? I know that is usually for losing weight, but it seems that it would do the same thing as a fundo if placed at the very bottom of the esophogus? Thinking out loud....

Also, since Bella should be on the waiver program, I wanted to pass this on to you. Here is a link for a bed that we use for my son. It articulates just like a hospital bed and you can see through the side panels. The newer version has a way that the mattress raises and lowers, so you can have it higher in the bed right now while she is little and move it deeper into the bed as she grows/gets more mobile. The company has a section on there that has a form letter for the docs to write that helps to get them covered 90% of the time. Since this is going to be a once in a lifetime purchase, I would suggest the sleep safer bed, don't let them push you into a crib. It would only last her a couple of years and then they would balk at buying an upgrade. www.sleepsafe.com We really love our bed. It took awhile to come in as they don't manufacture them until they are ordered, but TOTALLY worth the time and effort. The newer versions also have removable IV poles and vent tube holders - they didn't have those options when we got ours.