I honestly have no idea how she has grown during the fifteen days she was in ICU – she ate nothing.  TPN with lipids and IV fluids were maintenance, I thought.  But grow she did.  Bella, you are amazing! 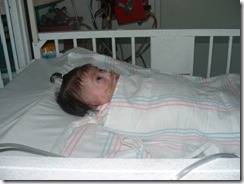 Bella staring at her mobile. 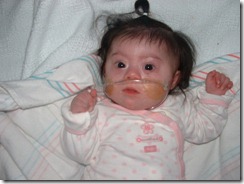 I was determined that Bella was going to be bathed and dressed every day now.  We finally got all that old blood off of her and she is dressed again.  We are styling snap shirts so our doctors and nurses have access to her chest, but we are dressed like a normal human again! 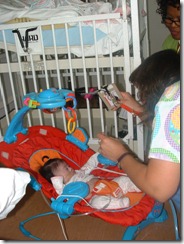 The doctors said treat her like a normal baby, so I marched down the hallway to the child life support and asked for a bouncer.  Here she is having her blood pressure taken and being given IV medication in her bouncer.

I asked about Bella’s Ph probe done back on March 2nd.  Everyone had forgotten about it.  This little thing called open heart surgery came up.  She has faithfully been on Zantac every day.  That was officially discontinued today because the test was normal.  Yeah – one less med going into her tiny body.

The quest for the perfect diuretic balance continues.  She has been on a large volume of lasix.  They want to wean that somewhat – the goal long term would be to discontinue it altogether.  Yesterday they made it IV lasix every 8 hours.  Today they made it PO (by mouth) every 8 hours.  PO Lasix is less effective than IV lasix.  My concern, and I voiced it to the Attending (because I have learned that you can talk all day to the residents and the fellows, but the attending doctor is the one that really has the final word) is that I don’t want to take away all of her diuretics too quickly.  She has been diuretic dependent her whole life, and when she gets too positive (more in than out) it effects her lungs every time.  Dr. Santos was voicing the question of why was she on such high volumes of lasix for her size.  As no one knows, this is where Mama interrupts, because she doesn’t respond that well to lasix.  Many doctors have told me that by now.  They give her a dose, they expect this huge output and she doesn’t produce.  So they usually end up doubling up with another diuretic.   Ahh.  (OK – pet  peeve (one of several) of a Teaching Hospital.  New doctors constantly.  No one consistent person to see her steady progress and know these things about Bella.  That’s why you are there Shelly, I hear you say.  Yes, true – but only if they LISTEN to me.  Ugh.  Sorry…back to the story)

I explained that I was concerned about taking away her diuretics too quickly and her lousy response to lasix.  At that point I explained that the doctors in California had her on lasix three times a day and aldectazide twice a day.  I quickly explained that I knew that they didn’t normally use aldectazide (they call it aldectozone here  - weird) here at TCH (can you tell I’ve had this conversation a few times before?).  She looked at me and said that is exactly what she was thinking of doing – lasix 3 times a day and aldectozone 2 times a day  - all by mouth.   So I am comfortable with this plan.  Whenever the doctors say something that is what the doctors and nurses in CA said or did, I feel comfortable.  They knew her.  It will change again, I’m sure, but I’m content right now.

Withdraw symptoms thus far: yucky diapers and feeling icky.  She wants to be held A LOT!

Jason is coming for the weekend tonight.  I will be at home with the rest of my girls.