Bella is zonked out.  I had a really hard time trying to wake her to eat last night.  She is sleeping now – which is not normal for her.  She is the queen of the micro nap.

Sigh.  I should know better than to get excited when a doctor talks about discharge (or surgery or any of our other plans).  We have a new attending today who has a new idea of what is wrong with Bella.  Sigh.  Maybe a few more days.

Today Bella is having another echo done and another x-ray.  They will be messing with her formula and placing an NG tube.  They are going to lower her methadone again.  They are trying.  I understand and I appreciate it, but they are also guessing. At least it’s an educated guess.

She woke up at one point today, so I gave her a bath and got her dressed and hoped that would wake her up enough to eat.  She took an ounce and a half, not as much as I had hoped. 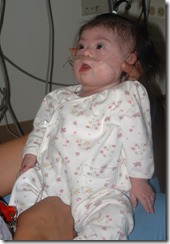 Still praying and hoping and being part of your journey! I know about the guessing...it`s so hard. We hope and expect that the doctors know and can help. But those tiny little bodies...they can react so different. Hopefully the results from x-ray and the other tests can show the way.