My favorite part of her being quasi awake (she’s still on a ton of fentanyl and versed)………. 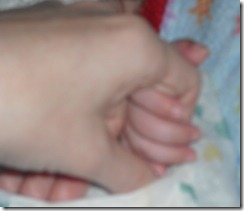 Evening rounds are complete.  We have lost our position of “sickest kid in the ICU.”  I feel bad for that child’s parents.

It's a problem with the lungs in which the airways literally do not stay open they way they should, because they are mis-shapen or too weak.  Malacia literally means "soft", and in this case, the lungs are too not stiff in places they should be.
For instance, usually, a person's trachea has ring-shaped cartilage that keeps the lung passage ways open in between the contractions of taking a breath; when someone has traceal bronchial malacia, the trachea aren't elastic and stiff enough to bounce back to their correct shape when they should.
The same thing can happen with other structures in the lungs, including the tiny air sacs that should swell open and closed with each breath.  If they don't change their shape properly, they may be malformed -- bronchial malacia.
Typically bronchial malacia happens in premature babies, whose tissues haven't matured sufficiently to perform necessary functions for breathing.  Most of these cases have a good chance of sorting themselves out as the child matures -- if the child can be kept alive long enough.  Bronchial malacia can also happen due to chronic long-term disease or chemical exposure.  Genetic causes would be unusual but not impossible.

I am sooooooo excited she is awake..time for her eyes to pierce the hearts of the new docs right ?

Oh I'm so crying right now at that video. I'm so happy for you because I remember how great it was when Jax opened his eyes and moved for the first time in 2 months. Its every mothers dream. Next step hopefully is to hold her. Another thing we went months without. Her hair is so long.

I'm so happy you've had a good day and that you were able to see those pretty eyes of hers. Three weeks.... wow! You are all fighters. I'm glad I'm on your side.
Krystal

What an amazing way to end my day ...Bella awake!She looks good and can I tell you something ... this child is your butterfly.She is patiently waiting to break free from her cocoon ,spread her wings and fly ... straight home.That is the only place you little love is going.Continuing to send you love and healing prayers from California.