Once again it is Daddy’s day with his Bella Bug.

This morning when I came in they had changed Bella from a pressure measured ventilator to a volume measured one to see if she tolerates it better.

She is still off of the VEC and is just sedated, so she does stir occasionally and seems to be doing fairly well.  They had her on 85% O2 when I came in and her sats kept around 85 which is the minimum they want her at.  they did go up to 90% O2 because she kept slipping to 83 or 84% on her sats.

When the doctors came through on rounds they asked if we had tried her on her belly.  They asked me if she has ever been on her belly and I told them I did not think she had.

They decided that they would try her belly as it takes some of the pressure off of the lungs and may help to improve her sats.  Once Bella was turned over her sats charged up to 91 to 92%.  We have backed down the O2 level to 85% and her sats are holding at 89 to 90. 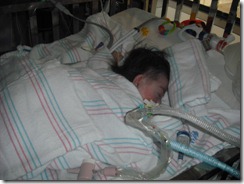 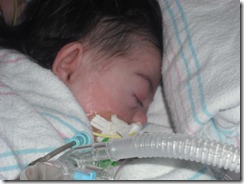 That is very interesting! We'll have to remember it. Joel's sats are always in the 80s, we always have a hard time getting him back home after a hospitalization.

I've noticed my older-than-infant kids with Down syndrome always choose to sleep folded over on their tummies; I think it's because of their floppy airways-- just makes it easier for them to breathe or something.

God bless little Bella and give you strength.