I love Dr Stein.  He has been the attending this weekend. 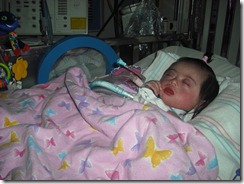 He is the director of Progressive Care and the Chief of the Critical Care Clinic.  He has taken care of Bella many times and knows her well.  He looks like a sweet Grandpa.  He loves to teach, and I love to learn.  He is very considered about who her pediatrician will be.  He wants someone really good who won’t panic over the little stuff.  We’ll see what happens on that front.

He has written to have her Nitric DC’d!!! It is off – officially gone!  Do you hear choirs singing or is that just me? 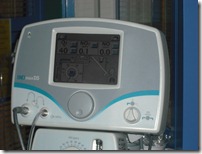 Then he asked me a question: Would I rather go home in 2 weeks on a vent or 6 without one?  Say again?  What?  Can you repeat the question?  Without a vent?  Is it even possible?  Of course, I would rather not have a vent and 24 hour nursing help.  He says it would be very intrusive and difficult to have other children to care for and nurses constantly in your home. (agreed!)   On the other hand, that might just be where she is and then that’s what it is – but there was a glimmer of hope in that statement.  So that brings up her bronchial malasia.  Can she actually get off the vent?  We’ll see.  If she can get below a PEEP of 7, that will be a good indicator.  There is also something called a stint that they can place that will keep those airways open.  So much to think about!  Then the pulmonologists did say that we could do the weaning at home, rather than being here.  So much to think about – but good things.  Yeah! 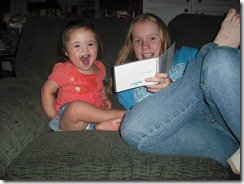 Fun stuff that Juli has done for us.  She and Becca made a photo book for Joy about Bella last Monday – and we got it in the mail!  Here is Becca looking at it with Joy, who obviously loved it! 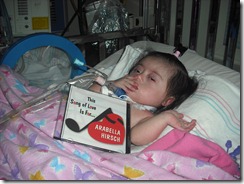 Back when we were in the PICU, Juli brought me a pamphlet about Songs of Love.  It is a non-profit organization that writes and produces songs for children with medical needs.  It usually takes 4 to 6 weeks to arrive after being sent in.  Juli says she doesn’t usually see the results because the patient has gone home by that point, but here we are.  It is a sweet song.  I’ll have to have Jason upload the song so everyone can hear it.  And then maybe I’ll upload a video of Jessi singing it – so sweet!  Thank you Songs of Love – and Juli!  It is wonderful and so very kind!

So many good things in such a short period of time - what a blessing. Ether comes to mind - after the test of our faith....
Love ya.

"Hope is that thing with feathers that perches in the soul and sings the tune without the words and never stops... at all." ~Emily Dickinson

All good stuff Miss Bella ... you are breaking out of that cocoon ... I can feel it!

How Wonderful! Hope and good things to think about...and home! Wow! You can do it Bella. You too mommy. I won't know how things are going for the next five days due to girls camp so I hope to see many good things have happened when I get back to technology. Love you!
Krystal

So many decisions, I agree that you can wean her at home. No reason sitting around a hospital.

Yeah for all this good news! I love hearing about people and companies like those behind Songs of Love.

You have done good work by publishing this article here. I found this article too much informative, and also it is beneficial to enhance our knowledge. Grateful to you for sharing an article like this. Help with nursing essays